Happy Easter or Feliz de la Pascua!
Today, we decided to walk to the historic center of Mexico City.  Our hotel concierge warned us that EVERYTHING would be closed for the holiday.  Boy was he wrong!  The CH (Centro Historico) was packed!

To start our day, we ate a large breakfast of fruit, yogurt, churros, bread and freshly squeezed orange juice. We suspect that they use the oranges on the trees right outside of our room.  The hot breakfast plate today was chicken enchiladas with salsa roja.  Perfection! Kevin had two servings! 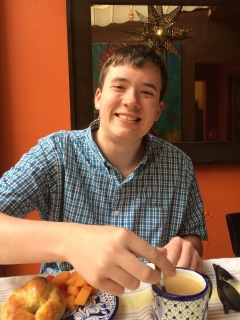 After breakfast, we stopped at the ATM.  It was a little frustrating when we were declined at first.  Apparently, the machine doesn’t care if I take out $400.  It just wants me to do it in two transactions (and two transaction fees).  Fortunately, our bank at home reimburses us for most of the fees, so it really is the best way to get cash here.  There are ATMs on every street corner.  I will never wait in line to exchange money at a Casa de cambios ever again.
We began our walk around 9am.  We wandered through the neighborhoods of Condesa and Roma until we reached the Paseo de la Reforma (simply called Reforma here).  On Sunday’s, it is closed to all motorized traffic.  It is the largest and longest avenue in CDMX so closing it is a really BIG deal.  The avenue is filled with cyclists, joggers and families out for their Sunday walks.  There are Zumba demonstrations and lots of small stands with people selling everything imaginable.  When we reached Reforma, we stopped briefly at the Angel of Independence monument.  The entire length of Reforma is dotted with huge monuments depicting important moments in Mexico’s history.  While taking photos on the Angel monument, I noticed some men doing jump rope.  It turns out they were employees of Powerade and they were doing a contest to see who could jump the most.  I ran over to them (pushy mom) and showed them Kevin’s backpack and told them he was a jumper.  At first, the man kind of rolled his eyes at me.  Then, when he saw that Kevin had his own rope (the sign of a true professional indeed), he gave him the center stage.  Kevin performed a short routine that made jaws drop!  Immediately, they started showering him with Powerade bottles and then asked him to perform again for their videographer.  After his second show, the crowd cheered!   They Powerade reps all asked if they could have their picture taken with Kevin.  It was a true moment to remember!  I love priceless memories that are made while just exploring.  You can’t plan or write a script for them.  They just happen because you are in the right place at the right time.  It was priceless! 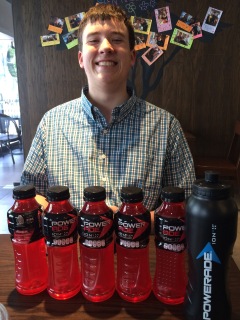 After that experience, we immediately had to stop and post pictures and videos at a local Starbucks.  Once all social media outlets were updated, we continued on our way to the center of town.  Along the way, we stopped at the Palacio de Bellas Artes.  What a beautiful place!  We are hoping to return to see the Ballet Folklorico here on Friday night.

We made it to the zocalo by 11:10am.  We were surprised to see that they have built a temporary baseball diamond on the square for the Mexican City Series Festival.  All major sports media outlets were present for this. I’m not exactly sure what games are scheduled to be played here, but it was really neat to see the full field with bleachers and all! 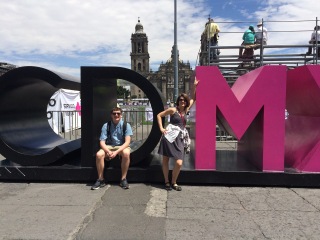 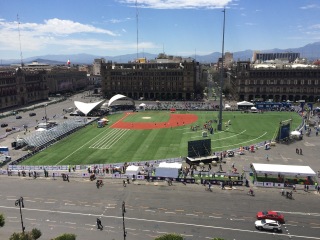 We walked around the zocalo to the Metropolitan Cathedral which is the largest cathedral in the Western Hemisphere.  We were early for Easter Mass so we took a tour of the bell towers.  What a great decision!  This tour takes you up several winding staircases to the roof of the cathedral.  The bells were ringing very loudly because of it being Easter Sunday (15 minutes before high noon mass).  Kevin got very light headed and his ears were really hurting! The views from the roof were spectacular.  We left the tour a few minutes early so that we could be back in the sanctuary for mass at noon.  As expected, it was standing room only.  It was really cool to see the Cardinal of the Mexican Archdiocese preside over the Mass.  However, it was warm inside and Anna became very light headed.  We decided that we couldn’t stand any longer and left after the Gospel reading.  Sorry God!  We will make it up tomorrow when we visit the Basilica of Our Lady of Guadalupe! 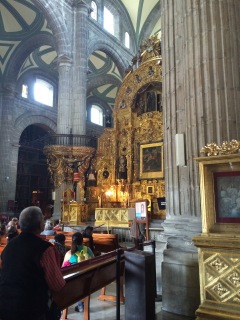 We found a gorgeous restaurante with a view over the Aztec ruins at the Templo Mayor to have our Easter meal.  I can’t begin to express what a fabulous experience this was.  The food was superb and the view was amazing!  We shared some huitlacoche quesadillas (corn fungus, squash blossom and cheese) and some ceviche with octopus, squid and shrimp.  For my main course, I had the chicken with mole.  Kevin had enchiladas with red sauce (a repeat of breakfast).  Anna enjoyed a stuffed poblano chile with picadillo (ground meat with raisins).  She raved about it! 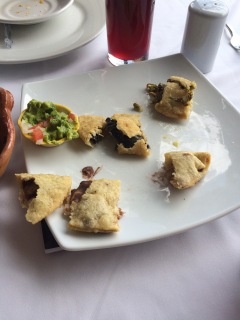 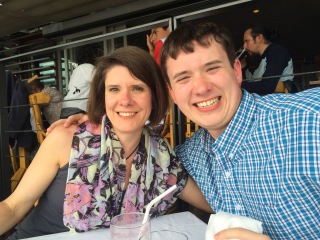 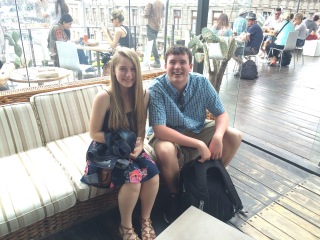 We had originally planned to Uber back to our hotel, but the weather was so beautiful that we decided to start walking.  We walked through lots of shopping areas and then happened upon the Monument of the Revolution where there was a concert being set up for later tonight.  Lots of families were hanging out, enjoying the day.  It was fun to see people acting the same way here as they do back home. 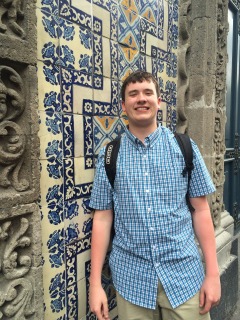 At this point, we were getting very tired.  I offered to take the Metrobus back to our neighborhood, but both kids said they were fine to keep walking.  We made a pit stop at another Starbucks to grab a drink, use the restroom and reconnect.  Finally, we began our last leg of our journey.  We stopped by a local pharmacy to pick up some Allegra for Kevin and Anna.  They are both having really bad reactions to the trees and grasses here.  The jacaranda trees are so beautiful, but we all agree that they are just as bad as the blossoming pear trees that we are missing at home.  Lots of watery eyes, sneezing and runny noses.  It hasn’t bothered me one bit.  Go figure.  We made it back home at around 5:30 with blistered, dirty, achy feet.  We knew that we had walked a lot, but I think the kids were genuinely shocked to find out that we covered nearly 10.5 miles today.

To celebrate, I grabbed a glass of wine at our hotel’s cocktail reception while the kids went out on their own to the 7-11 to grab their own drinks and snacks.  We are tired, sweaty, full and happy. No one will have trouble sleeping tonight!
Tomorrow, for our day of rest, we are going to climb the pyramids at Teotihuacan. 🙂

One thought on “Three 5ks in one day”