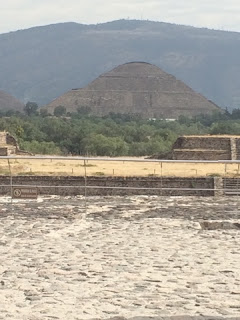 Monday, 28 de marzo
We awoke early to get out to the pyramids at Teotihuacan before the heat was too much to handle.  We hired a private driver through our hotel.  For a 30 minute drive out and back, it was totally worth the money. We paid $100 to have the driver for 6 hours.  His name was Delfino and the best part was that he didn’t speak any English at all!  It was like a full day of private Spanish lessons for all three of us.  First, we drove out to the pyramids where we climbed the tower of the plumed serpent followed by the Pyramid of the Sun and smaller Pyramid of the Moon.  The kids were in awe of the size and score of this pre-Columban city.  At one time, it is believed that more than 80,000 people lived there.  The climbing was exhausting, but we made it to the top in good time.  Again, the weather was absolutely perfect.  Not too hot, not too much sun and a nice cool breeze.  The crowd was thin as well because we got there so early. 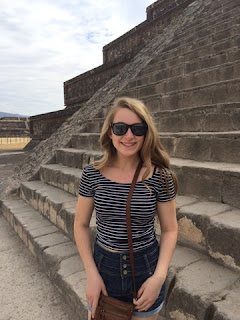 This is Anna before climbing the Pyramid of the Sun. 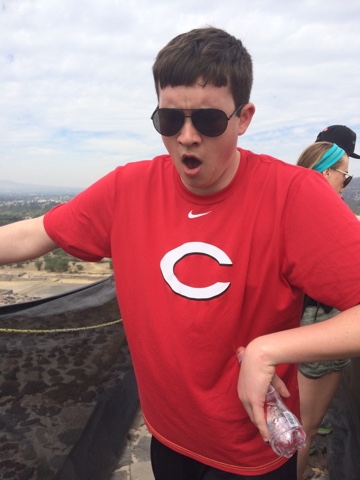 This is Kevin halfway up the Pyramid of the Sun. 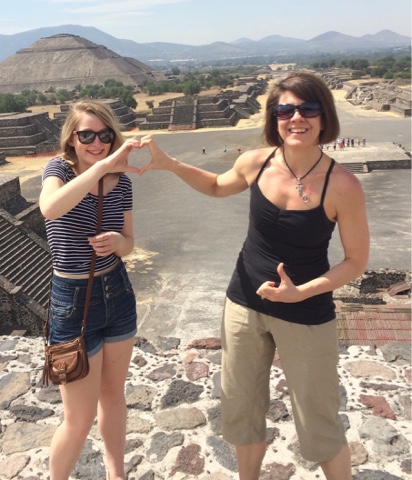 Anna and I tried to do that cute thing where you make a heart with your hands that becomes the frame for something interesting in the background.  We failed.

Our driver was waiting for us after we finished nearly 2 hours of climbing and walking.  He then drove us to the Basilica of Our Lady of Guadalupe.  As Catholics, this place is really a wonderful thing to see. For non-Catholics, it is still an amazing place to visit.  Pope Frances said Mass right here a few short weeks ago when he visited Mexico.  In fact, we have been to two of the churches where he delivered Mass.  The grounds at the Basilica are so beautiful.  We climbed to the top to see the beautiful chapel and spent some time picking up little souvenirs along the way. 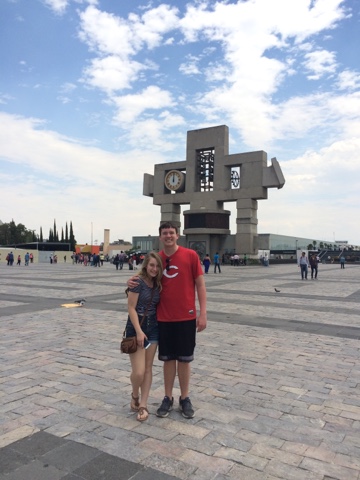 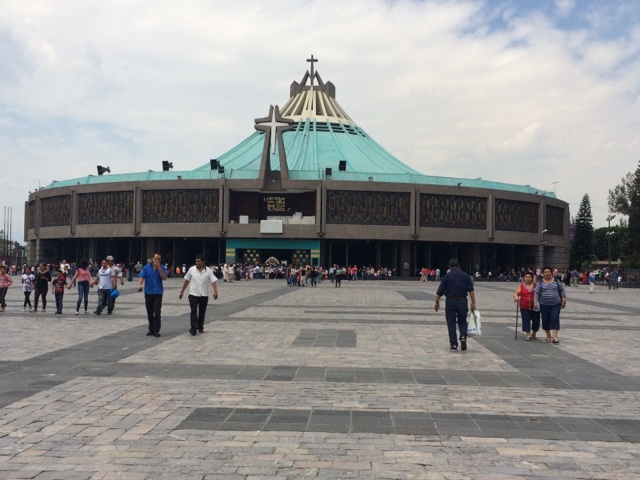 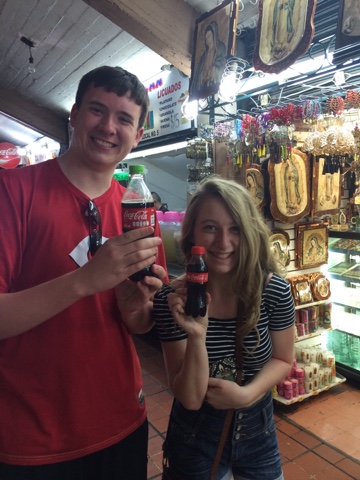 Anna with her tiny Coke and Kevin with his big Coke.  We were so thirsty by the time we got to the top of the hill.  The image below is the actual Guadalupe statue.  She is the dark-skinned Saint who appeared to the peasant Juan Diego.  The miracle of her appearance is what began the conversion of many indigenous in Mexico (and other parts of Latin America) to Christianity.  She holds a place as high as the Virgin Mary in most Latin American homes.  Thousands of people flock to the Basilica (some come on their bloody knees) to pay homage to her each year.  We actually saw a few pilgrims on their knees making their way into the sanctuary. The major day for visits to the Basilica is in December.  The entire area is packed with pilgrims from all over the world.  I’m not sure I would want to be there during that time! Imagine the traffic and the street vendors! 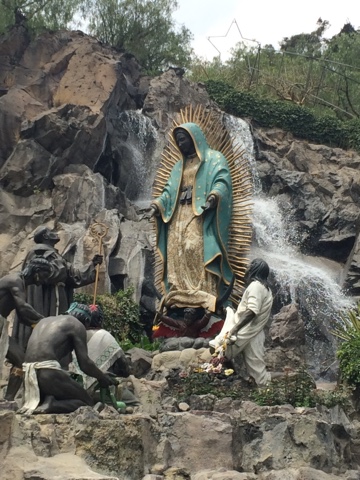 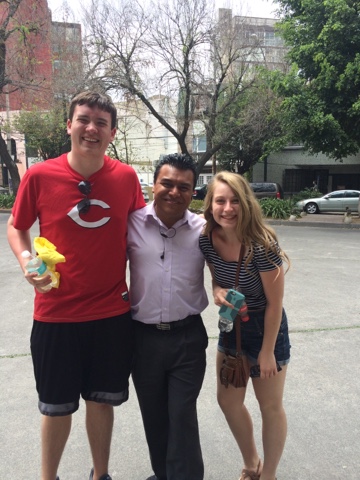 This is Delfino, our fabulous driver.  We learned so much from him and will remember him as a highlight of our trip.  He did a great job representing the pride of Mexico’s young people.  We discussed everything from drug cartel violence to American slang to Donald Trump. Getting his perspective on the controversy here in Mexico over the government’s handling of the 43 students who disappeared in 2014 was especially interesting for me and for the kids.  What a great time we had with him! 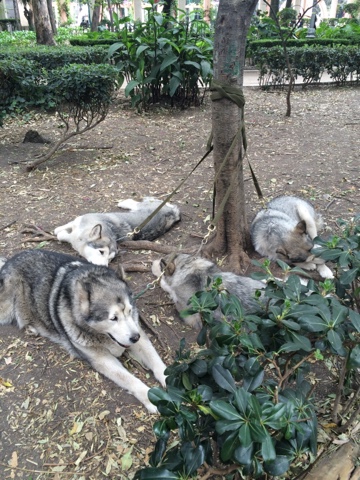 One the way back to the hotel, we tried to catch the Parque Mexico dog trainer.  He usually has up to 20 dogs in his care during the day.  By the time we got there, he was down to only about 7.  They weren’t behaving for a picture, but we did find these huskies waiting to be picked up by their mom and dad. We loved the Parque Mexico!
The kids decided that they wanted pizza so we decided to walk to La Pizza del Perro Negro. Brian and I went there last summer and loved it.  However, when Kevin, Anna and I arrived, we were told that they were too young to eat there.  What??  They can drink sangria in a fancy restaurant, but can’t have pizza at a restaurant with outdoor seating?  Seriously?  We were bummed.  I didn’t want to take a chance on a random place, so I encouraged the kids to walk a little farther with me to a place called La Casa del Tono.  It was Mexican comida time (2:30) and the place was packed.  Nearly everyone was in work clothes.  Kevin stuck out like a sore thumb in his shorts and Tshirt.  I said something to him about it and he got very angry with me.  By the time our meal was over, I think he understood my concern.  We had very poor service and found the place to be pretty unfriendly.  It was a super fast, casual place, but for some reason, we just stuck out there.  It gave me a good opportunity to talk to the kids about how important it is to try and integrate when you are in a foreign environment.  That doesn’t mean that you have to forsake all that you find important (like sneakers and shorts), but it means you may be better received when you act like you know what you’re doing.  Point taken.  Score one for mom. 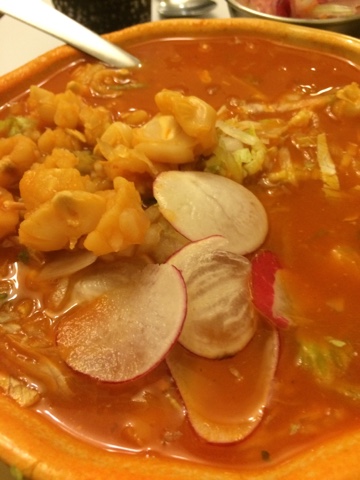 I thought the food was great.  Anna started with a horchata (rice milk drink) that she spilled on her lap.  I had pozole (above) which was super picante, but very good.  The sope below was covered in picadillo, lettuce and queso.  Kevin had cochinita tacos and rice pudding.  Anna had another squash blossom quesadilla.  Drinks, tips and everything, we were out in under $25.00.  Not too shabby!  We walked it off on the way home, but not until after we stopped for pastries at La Pasteleria Suiza.  I take back what I said before, you CAN find good desserts in Mexico. You just have to try a lot of them before you find one good one.  Kevin and I enjoyed our tasty desserts at our final cocktail hour at the hotel. 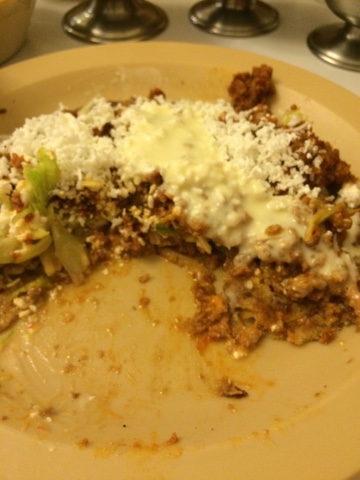 Tomorrow, we will spend a few hours back in the center of town before heading to Cuernavaca on a luxury bus.  Should be another day of adventure.