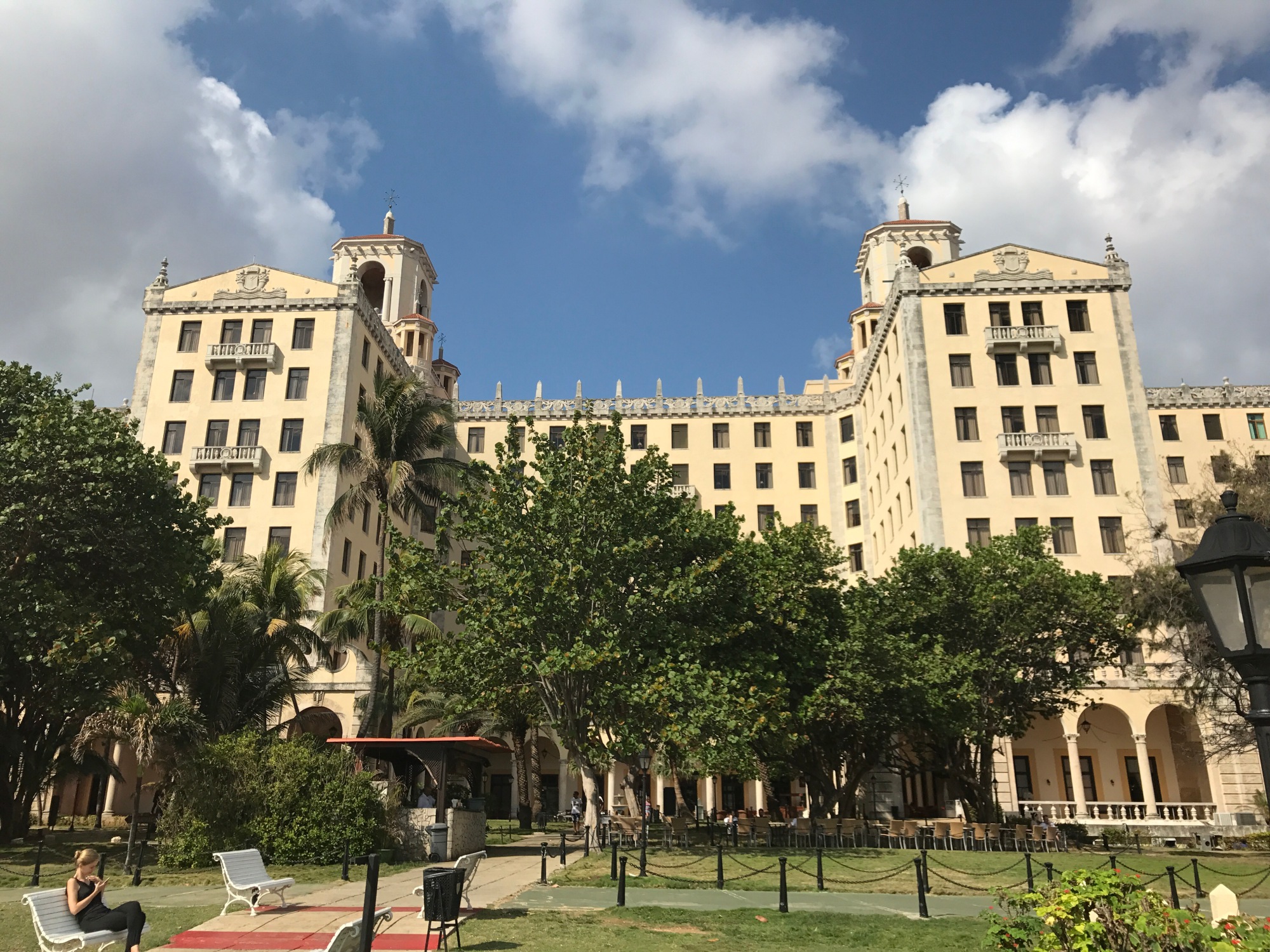 Wow! What a great night of sleep! In spite of the constant sounds of the street (including a rather loud and lively argument between two men at 1:30am), I was able to sleep soundly most of the night.  Walking 7 or 8 miles in 90 degree heat will do that to a person! 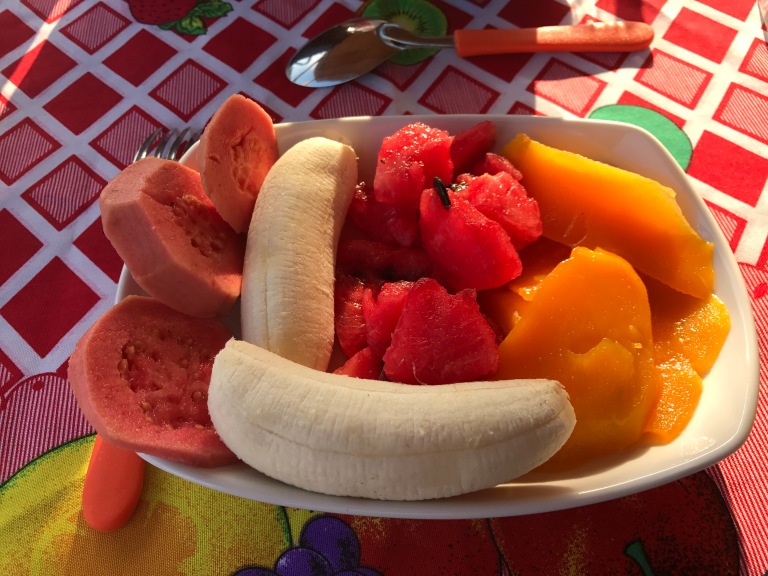 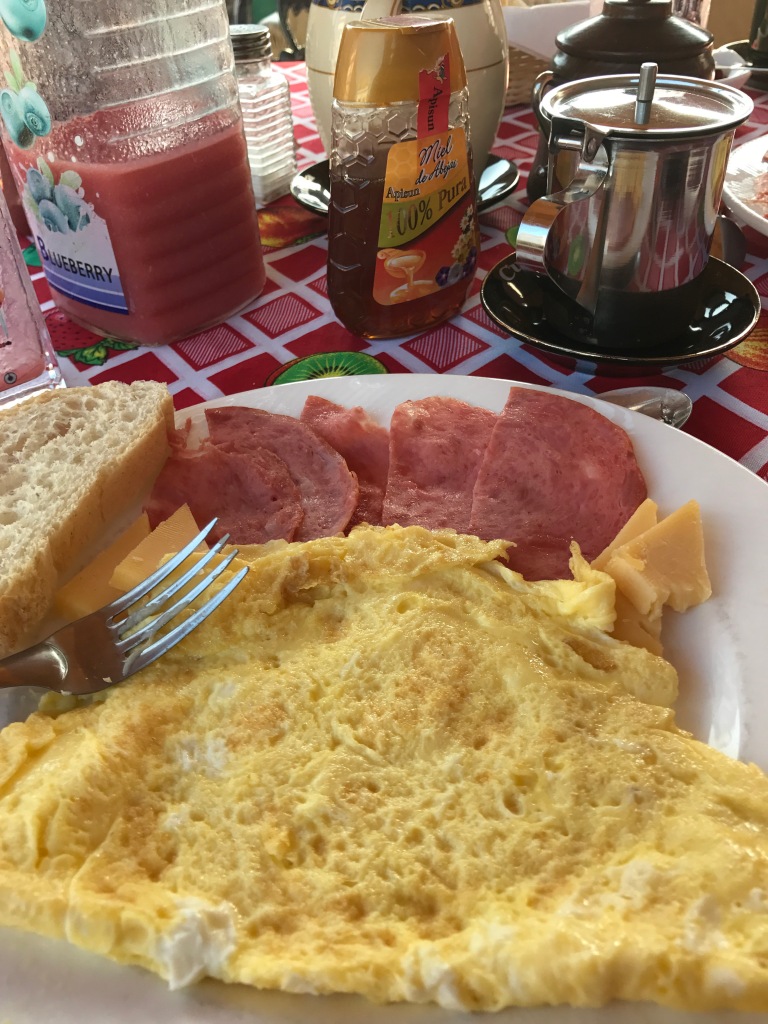 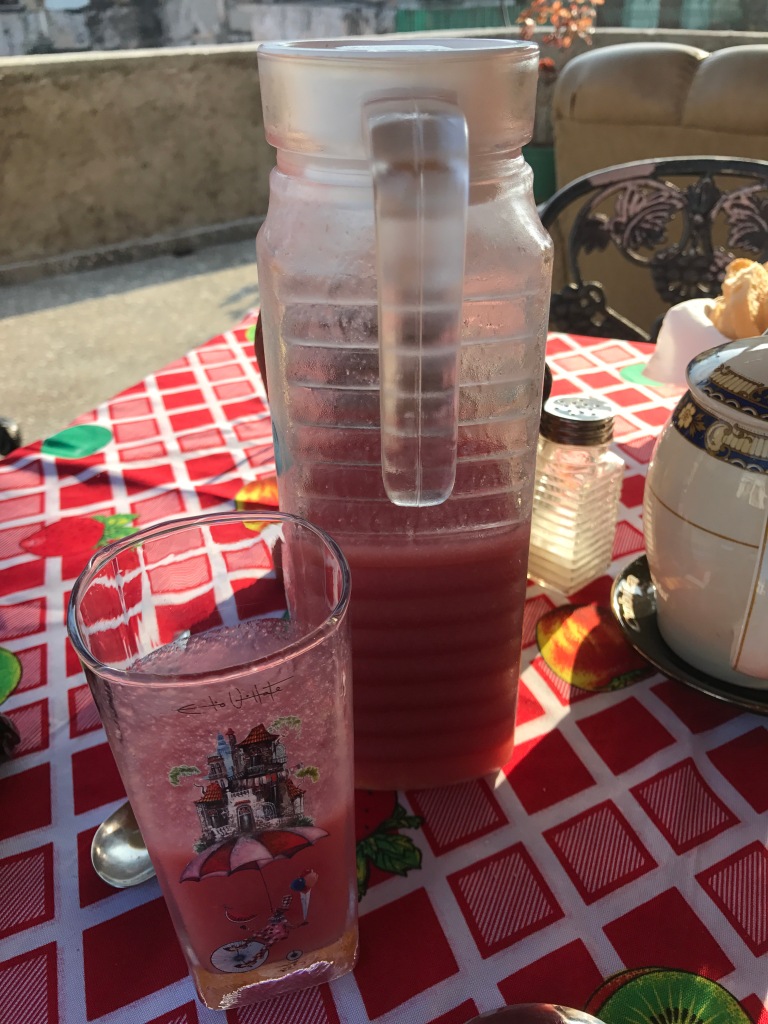 We got ready and then were treated to a delicious home-cooked breakfast by Doris, our host.  She and her daughter Laura served us fruit, bread, eggs, ham and cheese.  We also enjoyed some freshly squeezed guayaba juice. The guayaba slices and the mango were absolutely amazing!  We both had our coffee and promptly headed out for the day.

We decided to walk the coastline to the Vedado neighborhood. This is the newer part of Havana. By newer, I mean 1950s.  This area totally seems like it is stuck in the 50s! The buildings resemble that era and most have not been updated since then. This is the neighborhood where the main hotels of Havana are located. It is where the mafia and the Americans came to play in the 1940s and 50s.  Our first stop was a playground where we watched local kids play soccer with a ball covered in duct tape.  Note the pictures of the playground!

Then we moved to the iconic Hotel Nacional.  This is a beautiful landmark with lush gardens and architecture. We walked the grounds of this hotel and also visited the small museum devoted to telling the story of the “Russian Missile” crisis of 1962.  It was very interesting to see history from the Cuban perspective. 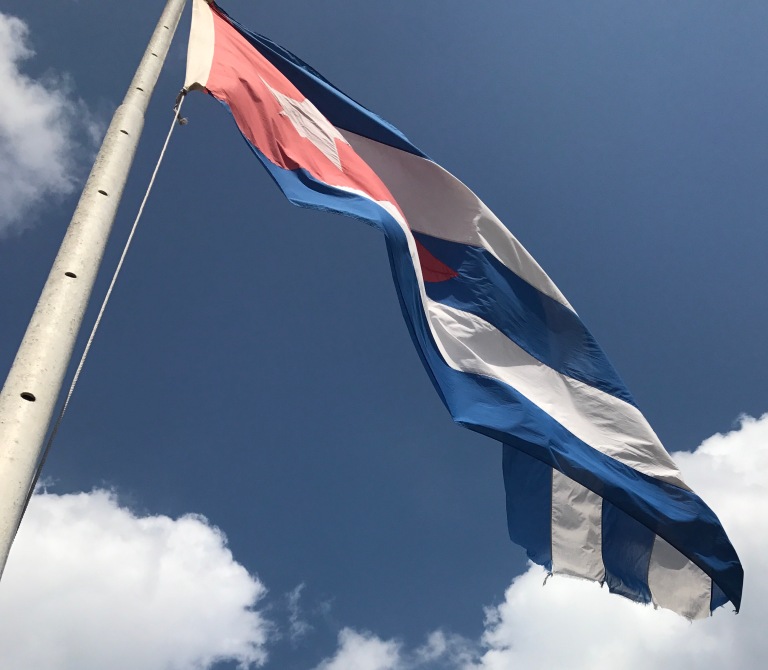 We walked and walked and walked after the Hotel Nacional to find an ETESCA stand.  The only way to gain internet access to Cuba is through the national telecommunications department, known as ETESCA.  Usually, you can simply buy an internet card at one of these kiosks for $1.50 for an hour of internet.  When we finally located a station, we were told that only 5 hour cards were available.  Not wanting to blow our chances, we bought two of them.  That was the easy part. The hard part is then finding a place where you can use them.  After many blocks, we ended up at the Hotel Presidente.  We didn’t want to just use the internet, so we grabbed a coffee and a Coke (yes, Coca Cola!) and sat on the terrace catching up on some internet business.  Mainly, we wanted to text the kids and let them know we were ok.

After our internet fix, we walked to the US Embassy. There, we saw the flag posts that were placed during the Elián González episode. They were built in front of the Embassy (called the US Interests Building back then) so that all US communications would be blocked and/or not viewable by Cubans.  What a unique place in history!

We were getting hungry by this point so we found a place called Cafe TV that I had read about in a guidebook.  Low prices, decent food was the idea.  It was a decent air-conditioned, state-owned restaurant.  I ordered the daily special, chicken with rice and beans.  Brian ordered a pizza with ham.  Everything comes with ham here!  It was sufficient, but not out of this world.  We both had a beer.  There’s nothing better than a cold beer when you’ve been walking out in 90 degree heat all day and can’t trust the water!  Our total, including tip was $10.00.  Good enough! 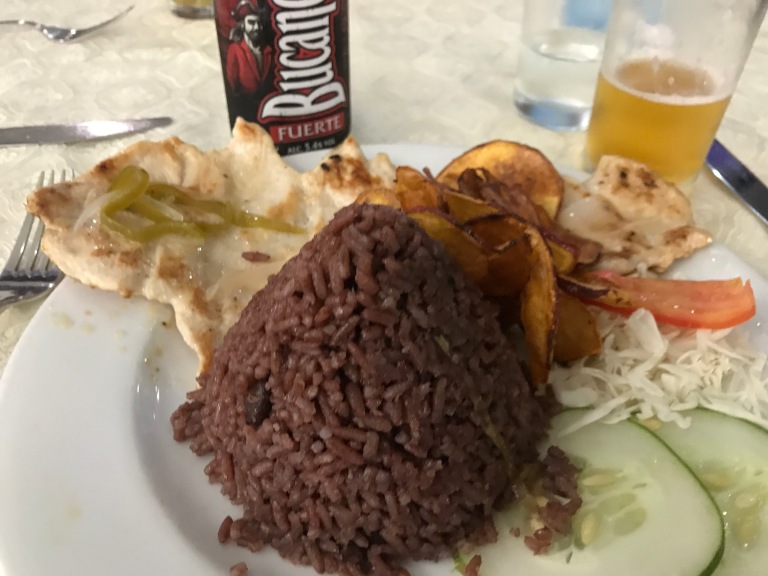 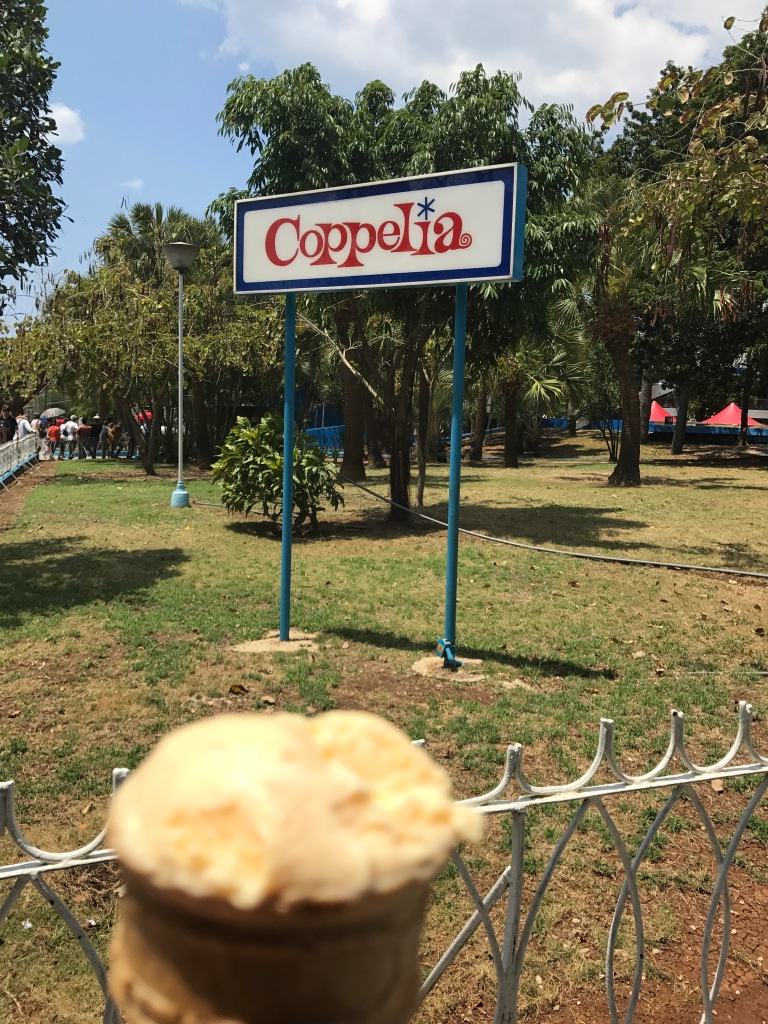 We decided to check out Coppelia on our way to the Plaza of the Revolution. It’s a very popular ice cream place for locals. For less than $1.00 they can get five scoops of ice cream (called “ensalada”).  Tourists don’t have to wait in the line that can be up to two hours long. I was conflicted about bypassing the line, but in the heat, I decided to use my position to get ice cream more quickly. Therefore, I did do a touristy thing by going to the more expensive line and getting one scoop of ice cream for me and one for Brian for a whopping total of $1.25.  It was decent, but nothing special. I guess if you are Cuban and this is the only way you can get ice cream, you’ll wait all day for it.  Very sad indeed!

We also stopped at a small cafe to buy some water.  We’ve been fortunate that our house has a fridge stocked with bottled water. We just pay our host for it! However, when you are out walking and your water is gone, you buy a bottle whenever you can find one. We got some water and a couple of pastries to try.  Mine was a coconut pie and Brian’s was chocolate.  Not good!

We walked for what seemed like miles to the Plaza of the Revolution.  Here we were able to view the iconic Che and Camilo sculptures along with the Jose Marti Memorial.  They are setting up for a huge gathering for Raul Castro along with a celebration of 55 years of revolution on Monday.  I would sooo love to be here for that, but we will be back in Mason.  Maybe next time! 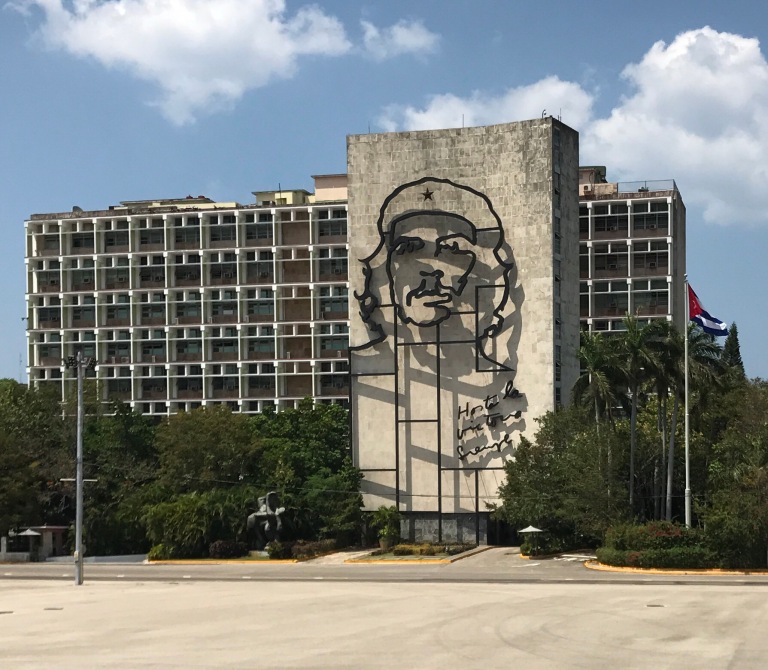 We grabbed an unauthorized taxi (by mistake) and got dropped off at the Capitolio. The capital building is built to resemble the US Capitol building in Washington, D.C.  Most evidence of the ever-intertwined relationship between the US and Cuba.  It’s under renovation so we couldn’t go inside.

One of the things that I really wanted to see here in Havana was the Esquina Caliente. While not an official site, this is where local Habaneros come on a daily basis to discuss/argue/yell/scream/cry about baseball!  In Parque Central you can always find these men. They have to carry license from the state to be allowed to assemble in public.  All they do, all day long is argue about baseball.  I was fascinated when I found them.  I just sat and watched!  Many of these men have never seen a Major League Baseball game, yet they KNOW baseball!  Brian and I worked up the nerve to talk to some of them (dang…no pictures of us together with our new friends). We learned that baseball is slowly being taken over by soccer here in Cuba.  The young people are watching more soccer and are seeing soccer heroes like Messi and Neymar which inspires them to be more like them when they grow up.  Professional Cuban baseball players who defect to the US to play for the Major League are banned from broadcast in Cuba. Kids are less interested in baseball now because they don’t see it as a way out, a profession, a ticket to freedom like those who came before them (i.e. Aroldis Chapman, etc.) Interesting indeed!  These are the types of experiences that I enjoy more than any museum, attraction or restaurant.  The conversations with locals.  Plus, they complimented my Spanish so that was nice too!

We stopped at another hotel, Parque Central, to suck up some more internet while having a drink at the bar.  Brian tasted his first Cuba Libre (rum and coke) and I enjoyed a sparkling water. While there, we got caught in the middle of a wedding! This hotel is renovated and beautiful! It also has expensive drinks and a lobby filled with internet-sucking tourists.

Another great nap back at the Casa Eliezer Verde before our evening out!