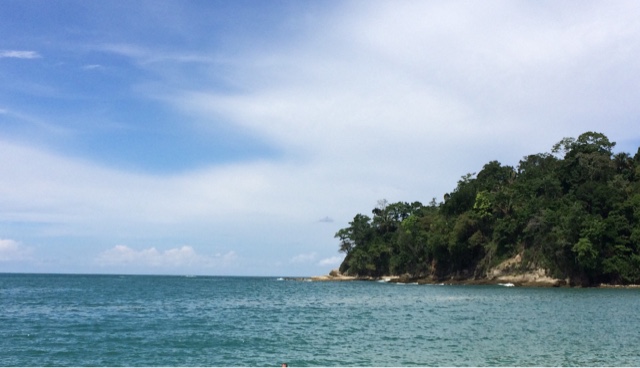 Today we left the hotel around 8am to travel about an hour to the smallest national park in Costa Rica, Manuel Antonio National Park.  I have taught my students about this park for several years, but until today, I had never visited.  My expectations were high and I’m happy to report that they were exceeded.  By far, today was my favorite day of the trip.  Our first breakfast here at Balcon Del Mar was great for the parents, but only so-so for the kids. It seems that pancakes have become a staple and this hotel restaurant only served authentic breakfast items like papaya (you know how I feel about that), gallo pinto, eggs, plantains and of course a nice pulled beef stew. What????  It sounded strange, but I had to try it. It was very tasty, but probably not the first thing I would order off a breakfast menu. Everything else was delectable! 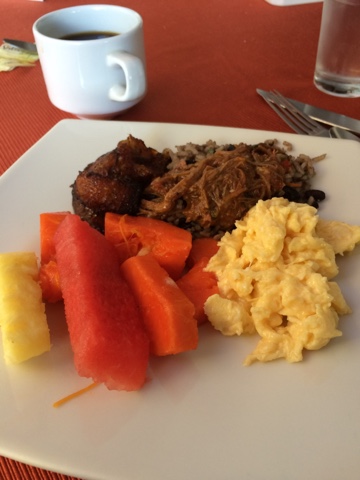 On the way to Manuel Antonioo, our tour guide pointed out a restaurant that is built out of an airplane. This airplane played a significant role of the Nicaraguan civil war between the Sandinistas and the US-backed Contras. Listening to Rafa discuss Costa Rica’s participation made me long for my undergrad days when I sat for hours in seminars with refugees and professors who had survived and lived to tell about their experiences in war torn Central America.  The political climate of Central and South America post-1950 is so interesting to me and so unknown to so many Americans.  Things (like people who just “disappear” and political corruption) are still happening today in some places. People from the US can usually talk in detail about the Kardashian family but very few could even point to the vicinity of Nicaragua on a US map. There are some truly intriguing stories that have come out of Latin American in recent years. I encourage history buffs to give Latin American history a chance! 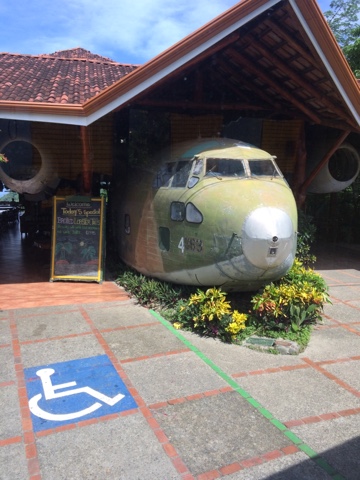 Now, back to Manuel Antonio…The park itself is both rain forest and beach.  To get to the beach, you must walk along the sloth trail.  The kids have been anxious all week because we haven’t seen as much wildlife as we had expected. Today made up for any shortfall!  Along the sloth trail, we met our first coati. The coati is a member of raccoon family, but is more commonly referred to by our tour guide as part of the “Manuel Antonio Mafia.”  These guys come out of nowhere and tease visitors with their cuteness.  They bait you into squatting down to eye level so that you can take a cute photo of them. Then, without warning, they take both claws and grab your knapsack.  They run off into the trees leaving you unsure of what actually just happened. No, this didn’t happen to us, but it happened to the group that was hiking beside us. It was both hilarious and terrifying as the coati took off with the poor hiker’s beach towel and apple. They warned us not to bring snacks into the park and now we know why. 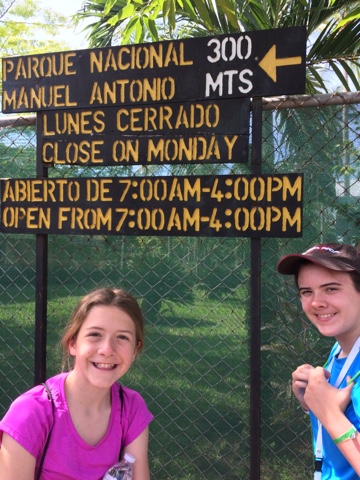 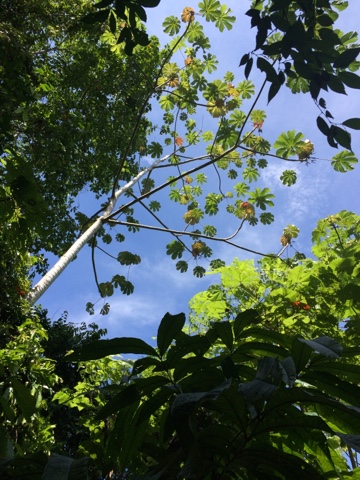 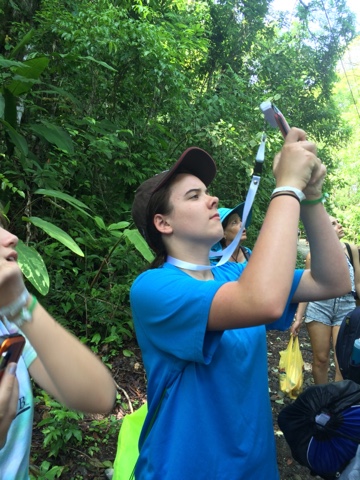 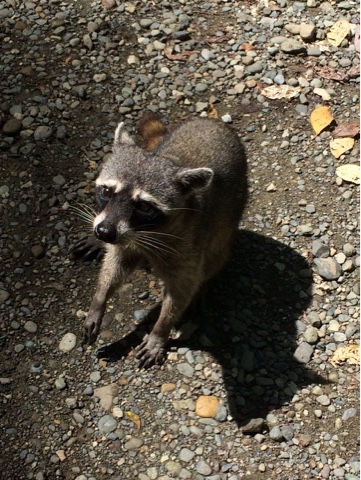 We continued hiking and saw a sloth that was too high up to capture on camera.  We saw these crazy looking crabs that would make really cool 4th of July decorations! They were distinctly red, white and blue! 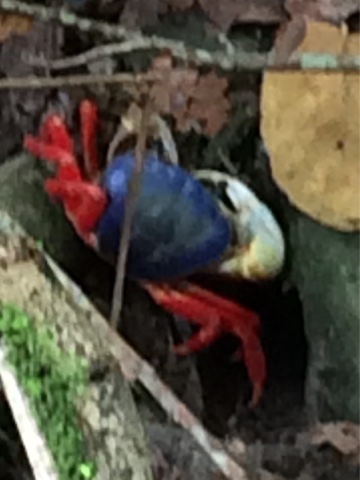 We also took a walk alongside this friendly deer. 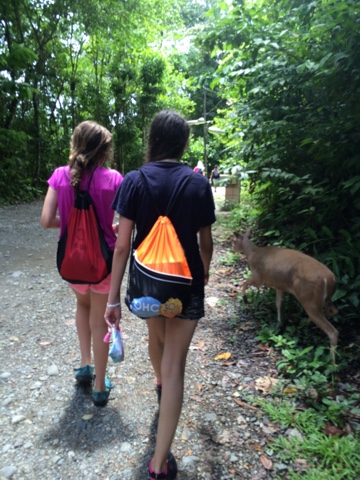 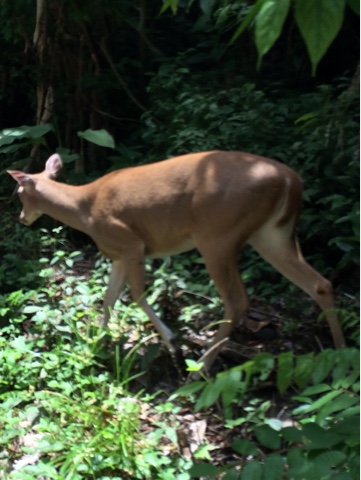 As we got closer to the beach, the fun really began. It was a white-faced monkey party!  Monkeys were everywhere.  Tons of photos were taken and the kids were thrilled. We also spotted another sloth. This time we were really able to see him up close. 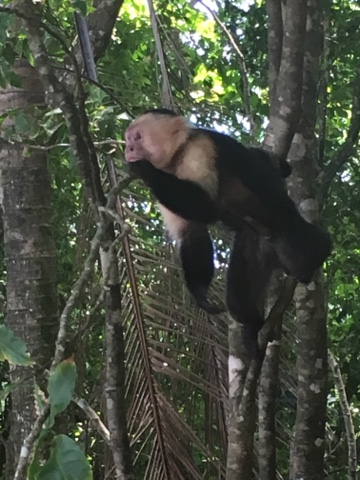 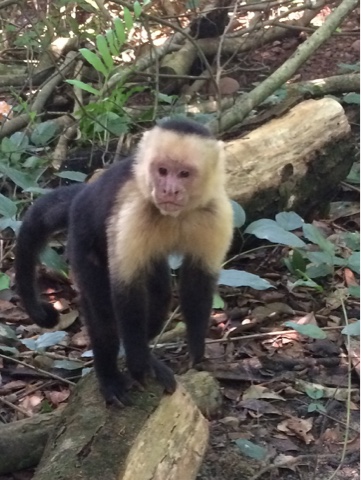 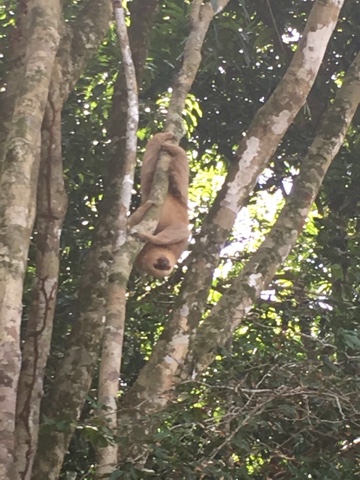 Once the thrill of sloths and monkeys subsided, the kids changed into their bathing suits and jumped in the water.  The beach was unbelievably beautiful.  The best comparison I can make is Hawaii. The views are gorgeous in every direction and eventually you have to stop taking pictures and enjoy it first hand.  While the kids went swimming, the adults supervised and took turns walking to various overlooks. The pictures don’t do it justice, but you get the idea.  I posed for my obligatory yoga shot and am very pleased with the result.  Tree pose is not a difficult yoga pose for me, but on top of a rocky boulder, with the wind blowing and waves crashing up on my feet, it was super challenging. I’m. actually surprised that we caught it on film! 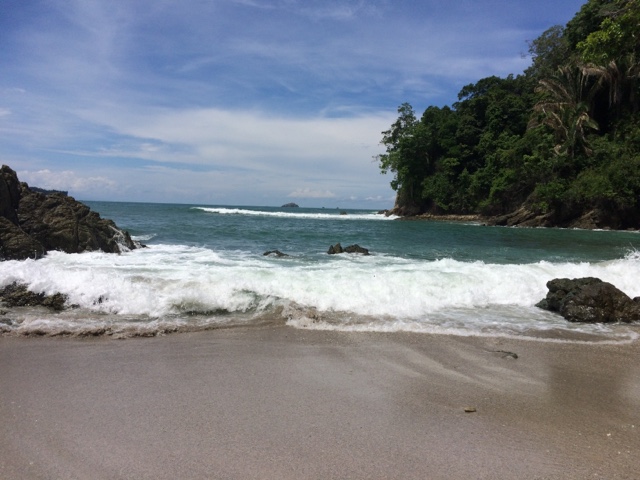 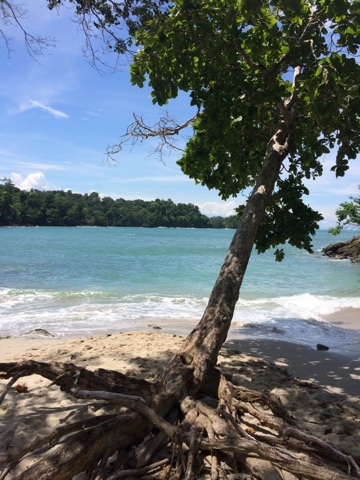 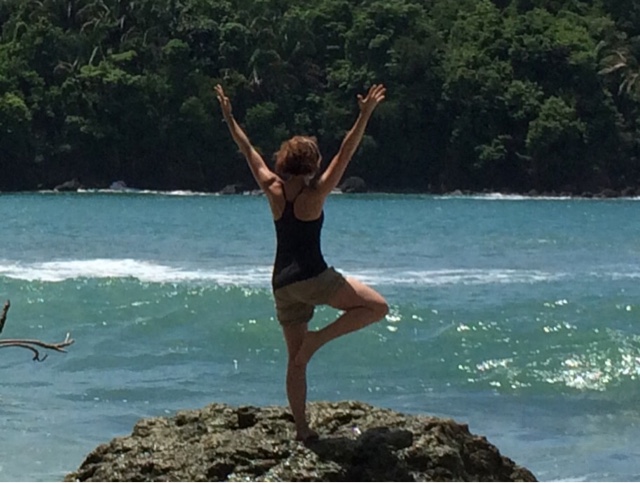 After beach time we walked to a local restaurant for an amazing lunch. It was as delicious as it was beautifully presented. We had marinated chicken, rice, beans, salad greens and fresh pico de gallo made with chayote and carrots. It was topped with large plantain chip and served with blackberry juice.  ¡Pura vida! 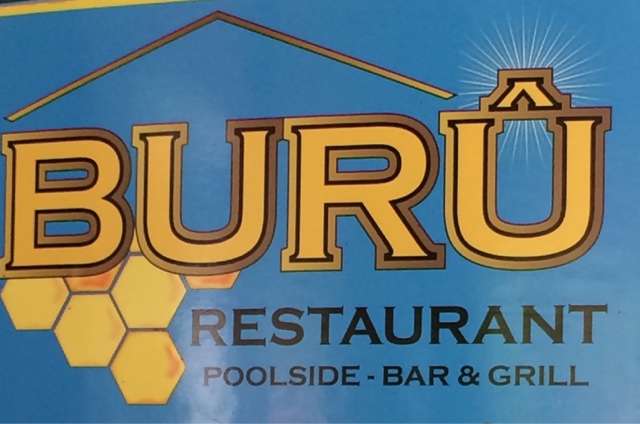 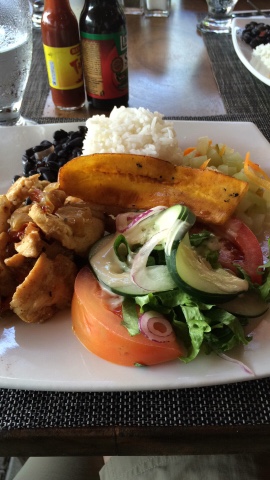 We boarded the bus and headed to a local rural school to visit with the students and give them some school supplies from the States. I was designated to be our spokesperson, but my job was eliminated quickly when the kids took it upon themselves to strike up conversations with their new Tico friends. While some kids practiced their Spanish with the students, most of our student travelers started playing a crazy game of fútbol with the students.  It was a hilariously unorganized game, but the nonverbal communication that was going on was priceless.  Cultural barriers melted today and kids were just being kids.  It was awesome! At the end of our visit, we took a group picture.  Then, I happily presented one of the teachers from the school with a large basket of school supplies.  She will hand them out to students in order of need.  I hope to send letters to the school this year with my own students to keep the lines of communication open. It was eye opening for the US kids to see the school conditions today.  One bathroom, a library with only a handful of books, open air classrooms, no technology and more.  I hope that they took a moment to reflect on how blessed we are to live in a place where our schools are clean, modern and academically challenging. Because of the shortage of teachers and state funds, Costa Rican students only take the four core academic subjects.  They go to school for either 4 hours in the morning or 4 hours in the afternoon. There are no electives like art or music in rural schools. Sometimes grades are combined into one classroom because there aren’t
enough teachers. While Costa Rica is one of the wealthiest countries in Central America, it is still poor by US standards. It is one of the few Central American countries with a middle class which sets it apart from its neighbor, Nicaragua. 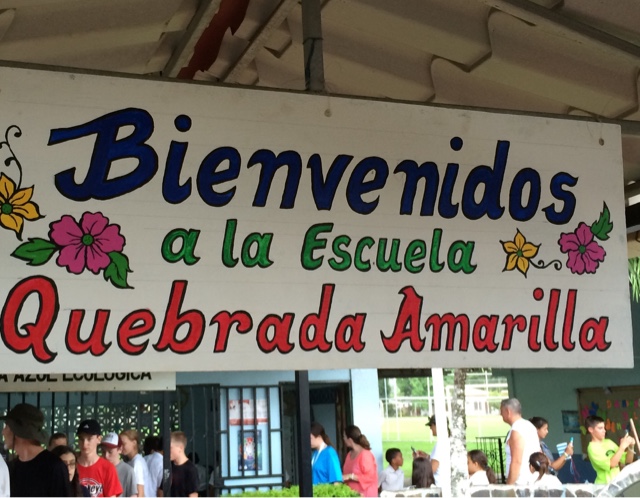 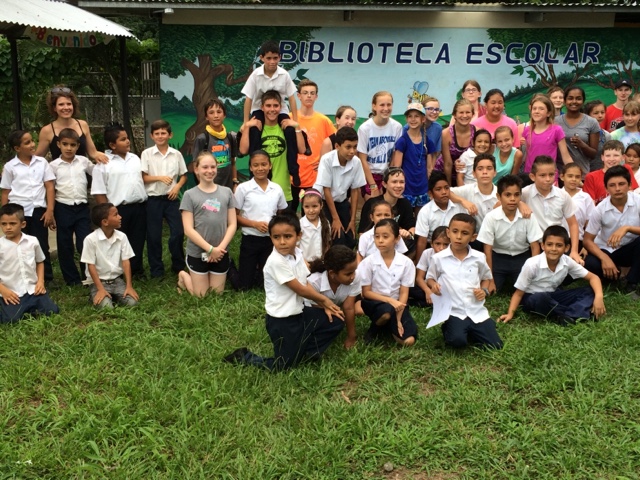 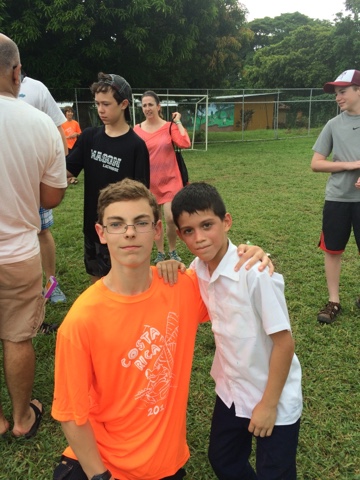 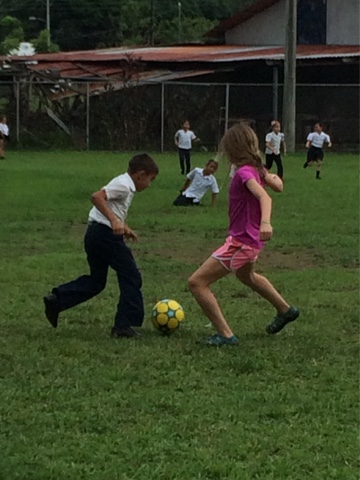 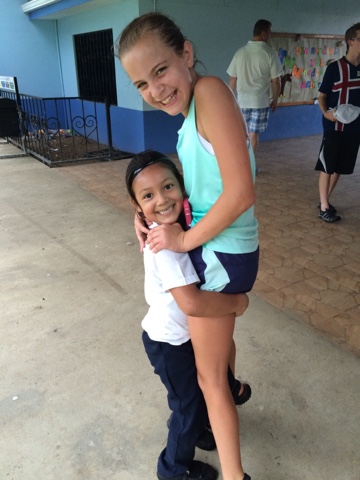 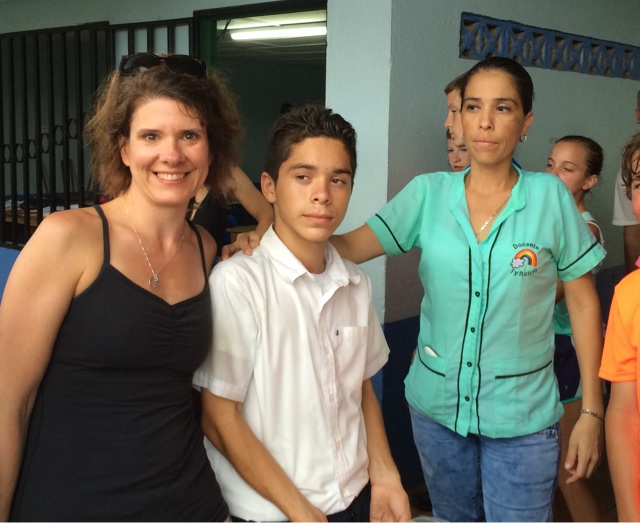 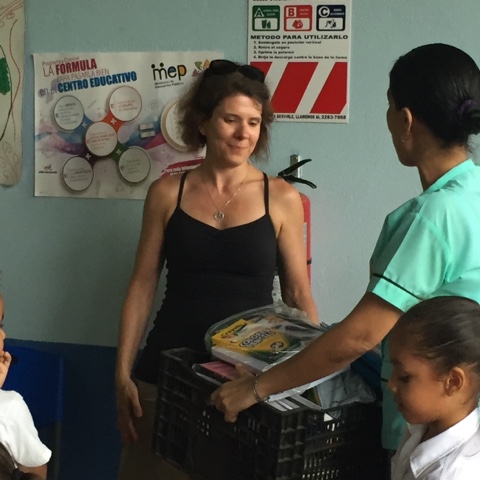 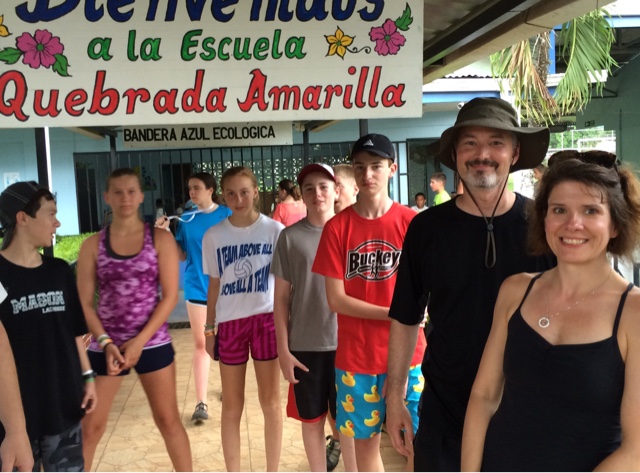 Upon returning to the hotel, we had some free time.  Many students went swimming while the adults supervised and reconnected to the hotel Wifi.  Others, like me, went shopping. I picked up a couple of souvenirs and made it back in time for dinner.
For dinner tonight, we had several options.  Our cold course was a choice between beet salad or tossed salad.  Why thank you, I’ll take both.  We then could chose from rice, garlic pasta, veggies, chicken or beef stew.  It was an odd combination, but it worked. Some of the kids bought themselves ice cream after dinner. Desserts are not a priority for
most Costa Ricans. 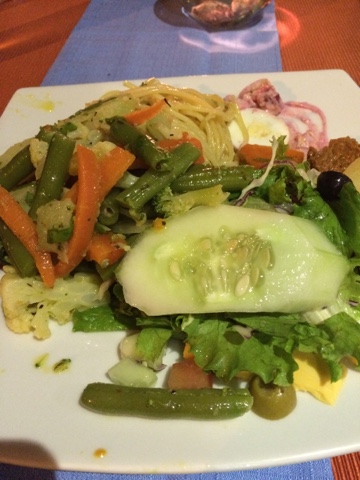 We will hit the sheets at 9 tonight and tomorrow we get to sleep in until 8!  The morning is free for swimming or shopping.  Then, we leave promptly at noon to start our journey back to the capital.

One thought on “Tuesday: Manuel Antonio and La Escuela”