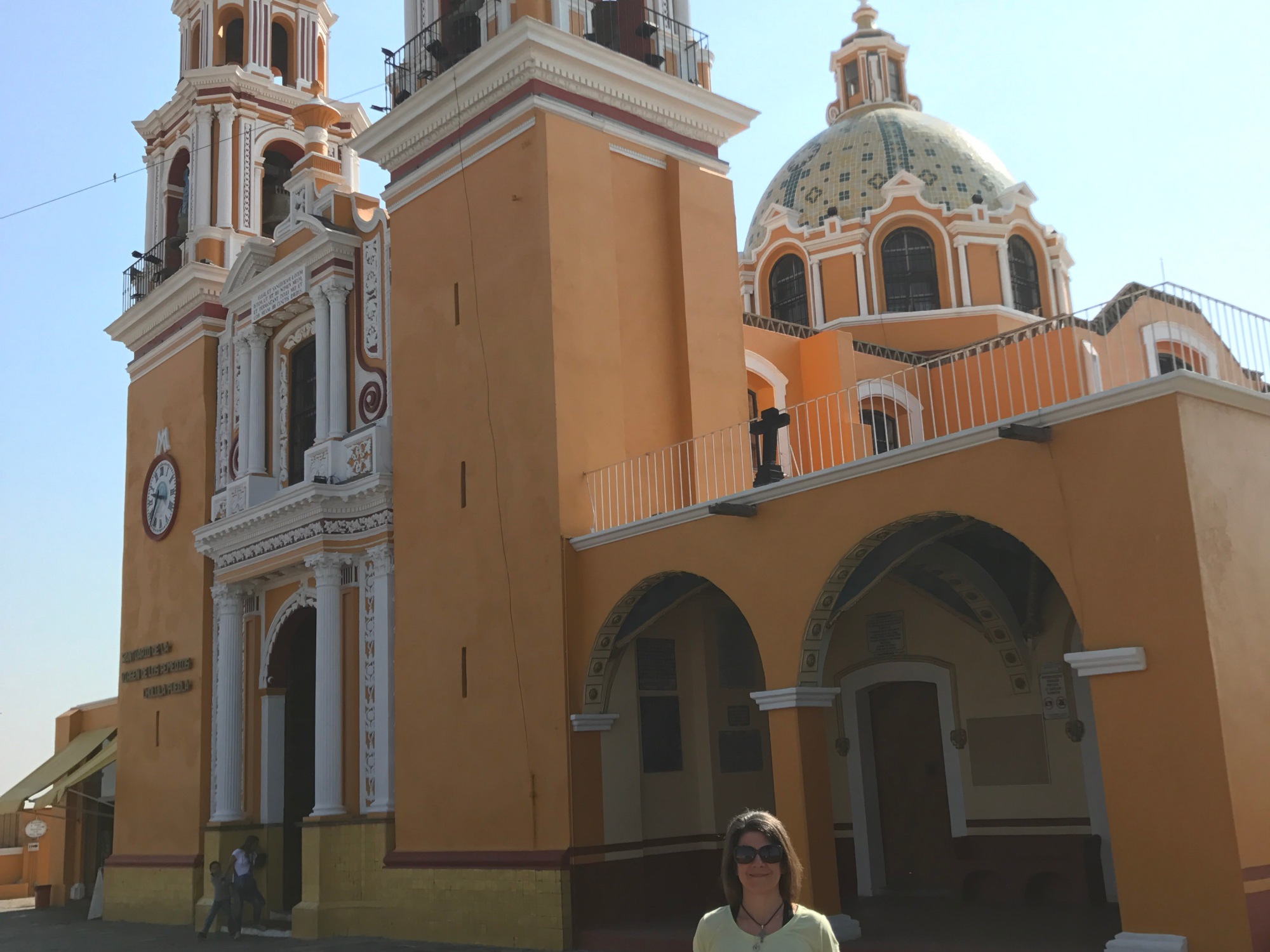 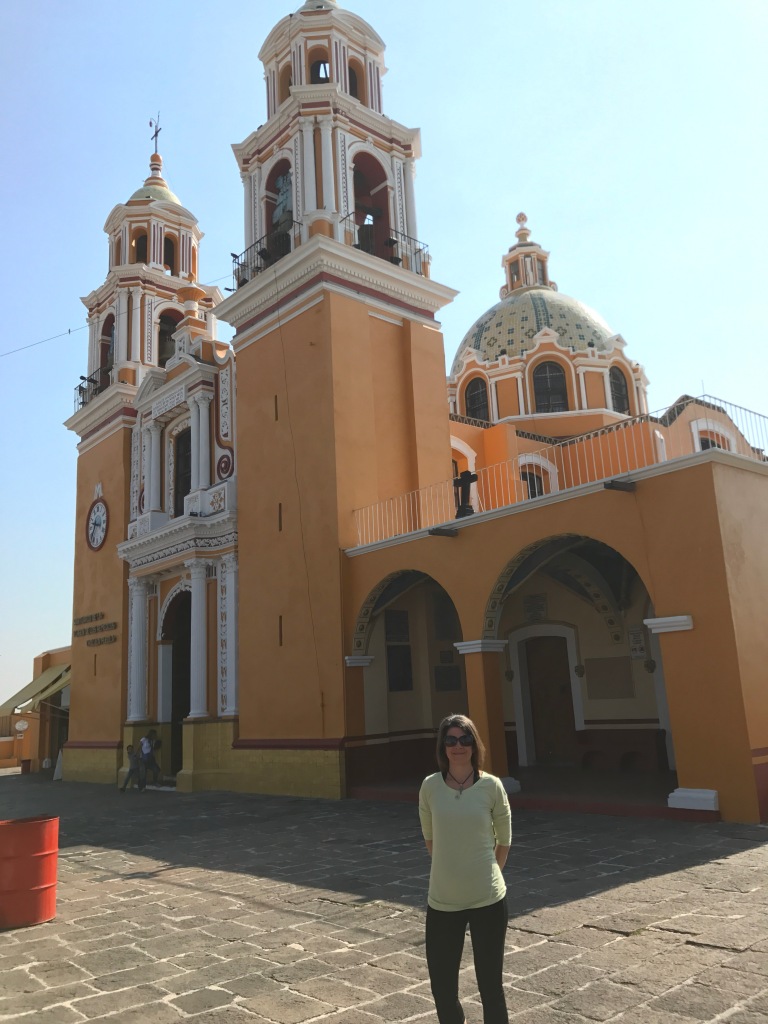 Today, Kevin and I took a short trip to the town of San Pedro de Cholula. This town is also called a “magical town” because of it’s rich history and culture. The main feature of this town is the pyramid.   Not just any pyramid, but the larges pyramid in the world (in volume). Bigger than the Egyptian pyramids. Bigger than Teotihuacan outside of Mexico City.  Why have we never heard of this pyramid? Probably because the Spaniards covered it with a huge mountain and put a Catholic Church up on top. It wasn’t until the early 20th century that archeologists began to excavate the site. Today, it stands as one of Mexico’s most amazing archeological zones. Kevin and I spent the morning as the only visitors to the site. We toured the grounds and climbed the steep hike to the top of the mountain to enjoy the views. Unfortunately, the intricate series of underground tunnels that have been discovered were closed for maintenance. We didn’t get to explore those during our visit.  The volcanos weren’t clearly visible today which was a bummer, but the weather was sunny and warm which made up for that. After hiking all over the archeological zone, we visited the small Museo del Sitio where the history of the excavation is on display. We were both really fascinated by the entire site! 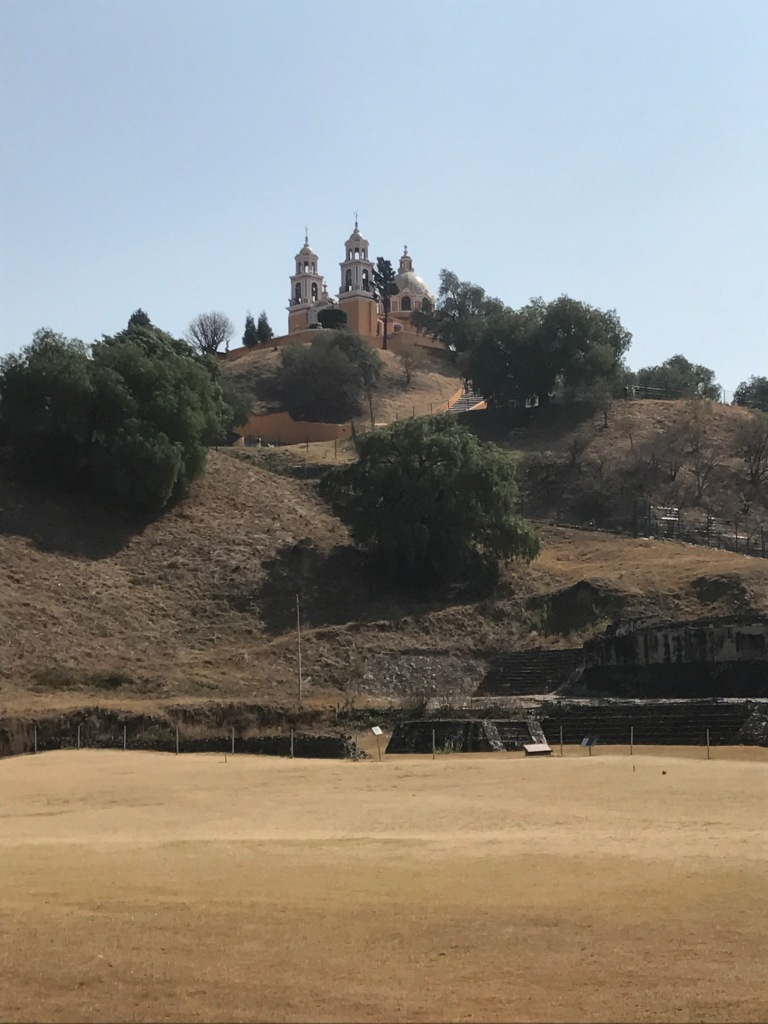 After the pyramid and church, we walked to the main plaza of Cholula. The town itself is one brightly colored house or building after another. It’s like out of a fairy tale. We walked into various stores before walking to the local cider factory, Copa de Oro.  We didn’t have time for a tour, but we did purchase two bottles of their famous fermented cider (2.5% ABV for me and non-alcoholic for Kevin).  I’m not sure I’ll enjoy hard cider again after tasting this fruit sparkling concoction.  I could taste so much apple in it!

After that short stop, Kevin and I walked through some of the residential parts of Cholula until we reached a relatively new development known as the Container City.  It is exactly what it sounds like, a series of containers (think P.O.D.S.) all housing either a restaurant, shop or bar. They are all connected in a very disorganized fashion creating what appears part night club, part outdoor mall. Apparently, day time is not the time to be there, but we did stumble upon an organic, locally-sourced health food cafe called Quilibrate. I had carrot beet tostadas and Kevin had what was called pizza, but looked more like salad on top of a tortilla. He was a good sport and ate it all! I promised him a special treat later! 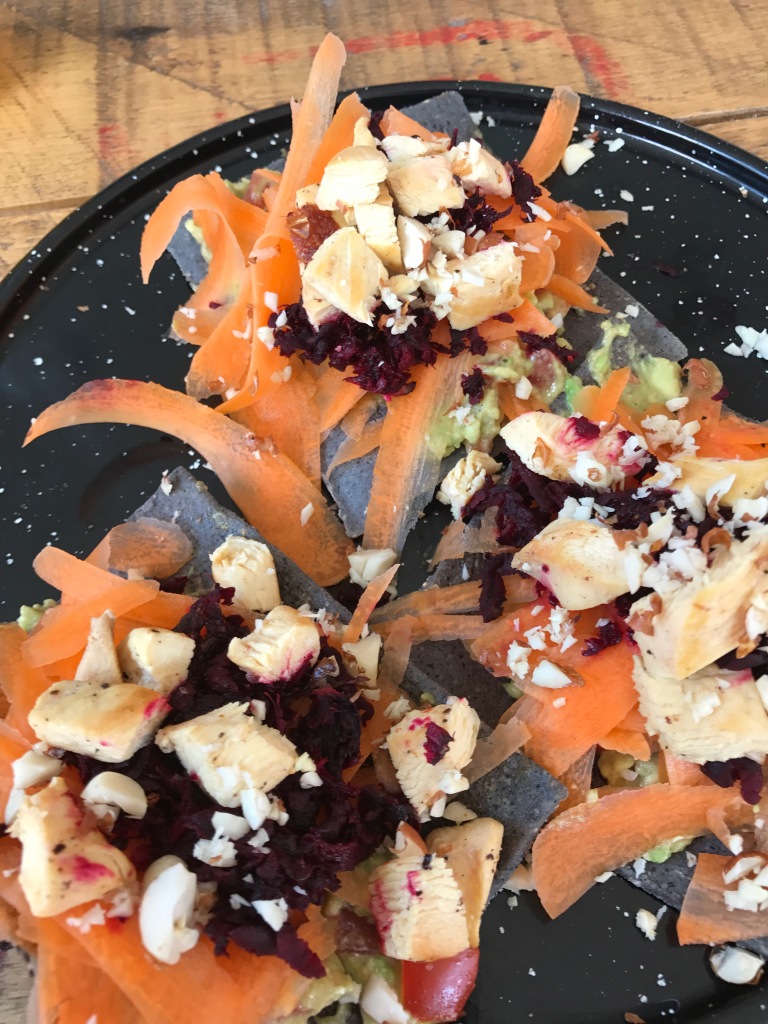 We Ubered both to and from Cholula (total cost for both ways was $12.00USD). We were dropped off at the plaza in Puebla where walked the rest of the way back to the hotel. For the remainder of the afternoon, we snacked on some homemade baked goods and lounged by the pool. We met our first US friends here this afternoon. Two automotive engineers from Detroit who come here often for business. It was the first English we have spoken to anyone other than each other all week. It was fun to share impressions of Central Mexico with them. It truly is a hidden gem!

We are dinner at our hotel. The Casareyna  Restaurant is considered one of the best in all of Puebla for its authentic ingredients and creative recipes. We thoroughly enjoyed it. We started with the maguey worm appetizer. It was actually pretty good. They taste like hollow french fries. I couldn’t pass up the mole sampler. It was delicious! Kevin had a stuffed chicken breast. I sampled two local craft beers which were tasty! 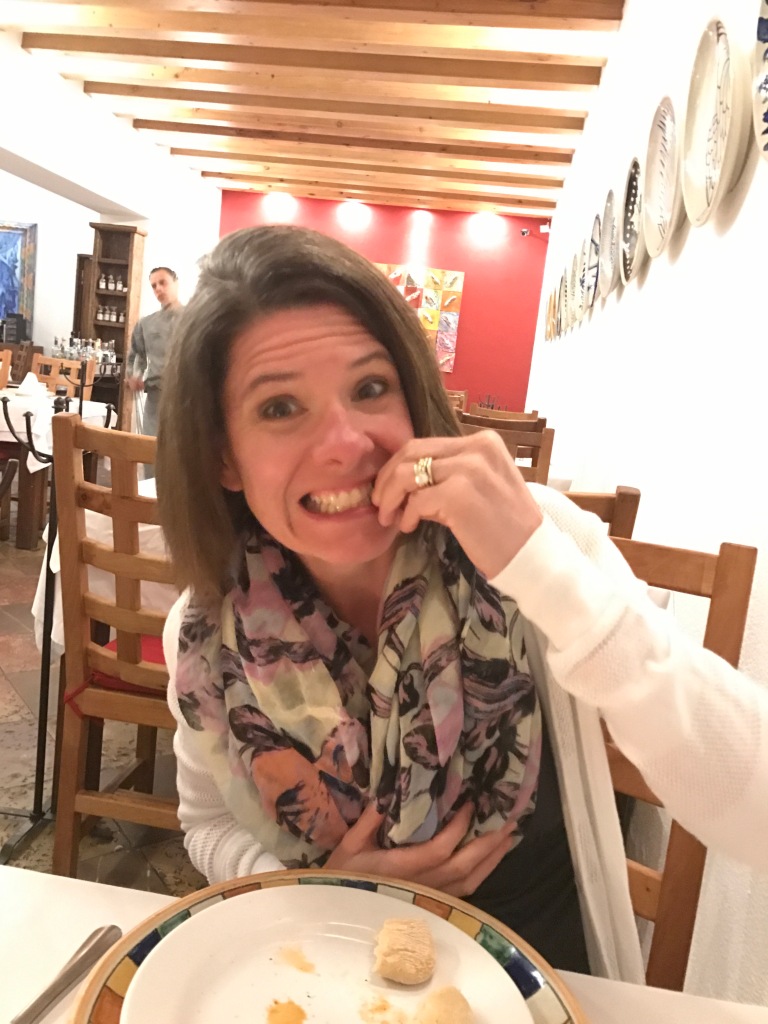 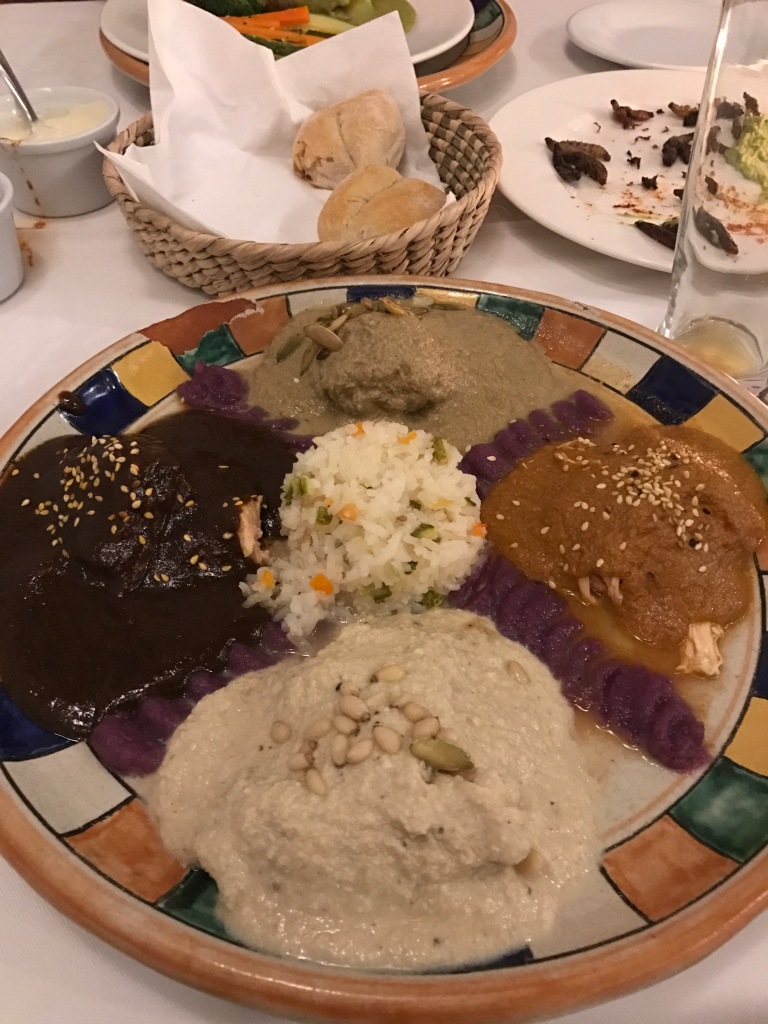 After dinner we walked back to the plaza to see the Cathedral at night. Then we returned to the hotel restaurant for some coffee and dessert. While we only walked about 7 miles today, much of it was uphill and at a high altitude. We are beat! 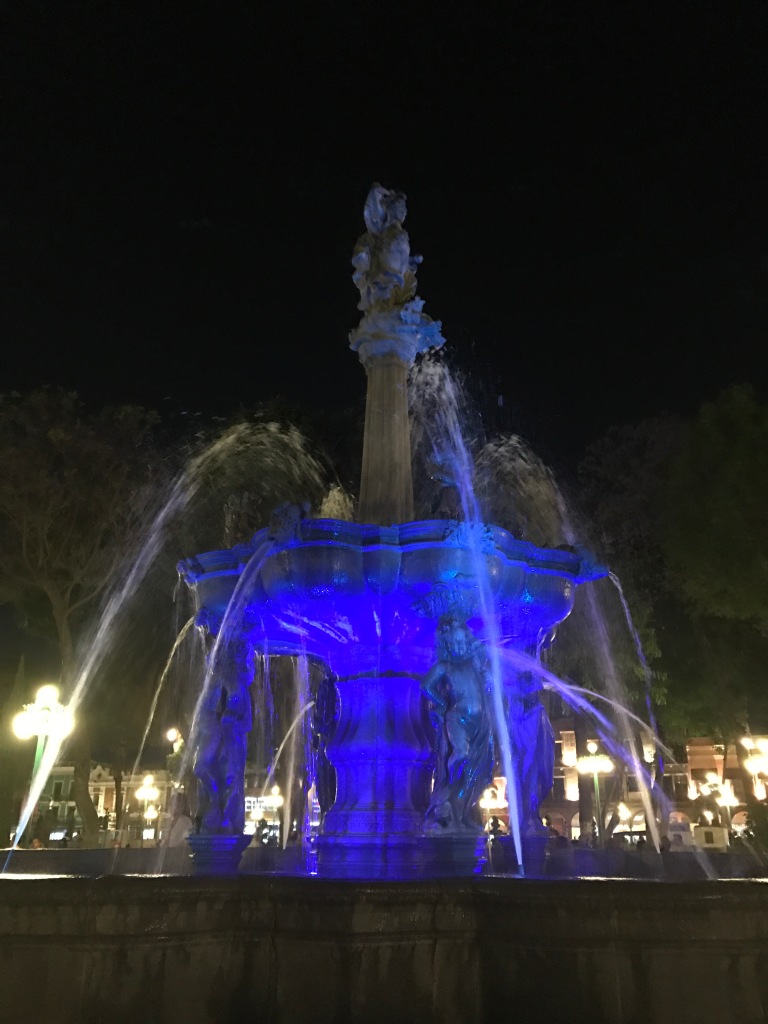 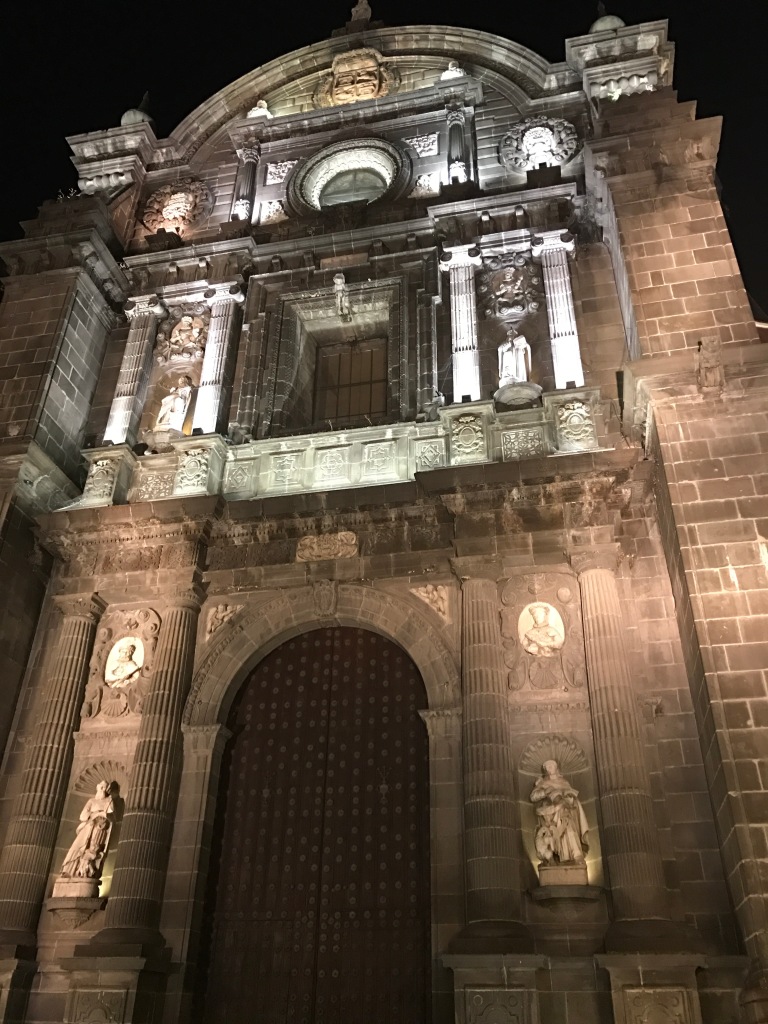 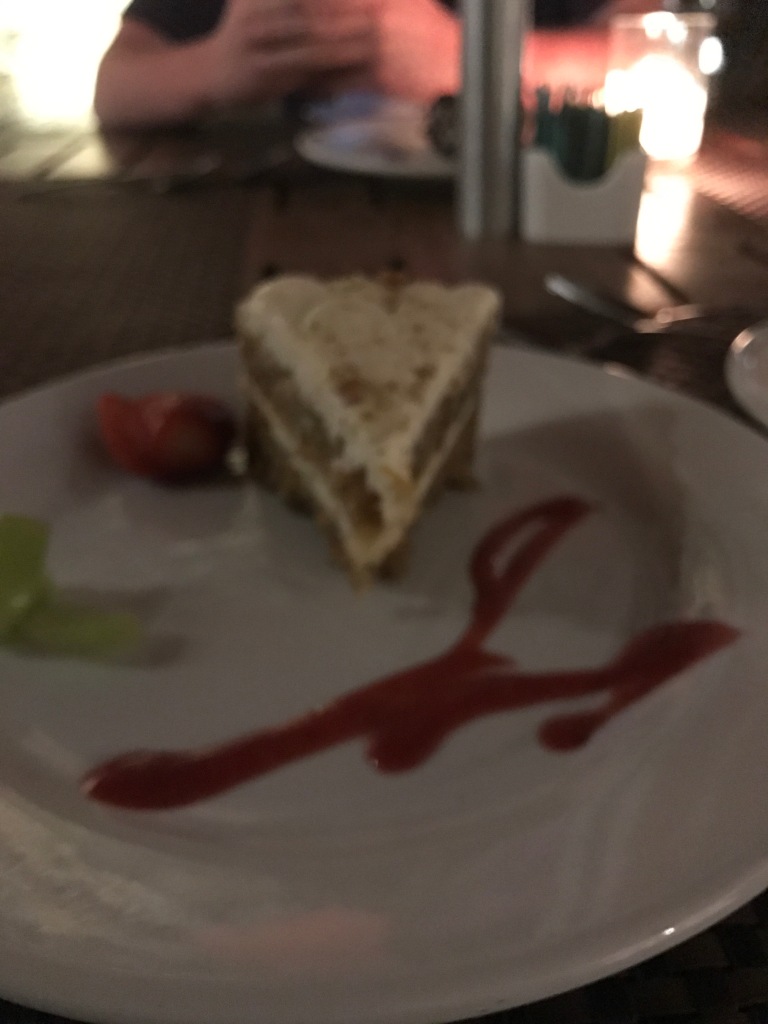